Contest Day 5: Crews and pilots woke up on Day 5, still very tired.  Ronald and AP, the JS technical support and crew members, prohibited the pilots from getting up early to help with the rigging.  When Attie and I eventually arrived for briefing, both gliders were rigged, ballasted and ready to be towed out.  This really allowed us to rest enough for another challenging contest day ahead.

The task set was a three hour assigned area task with four sectors and a control point. 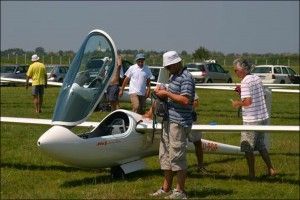 The JS1 trio planned once again a co-ordinated start, but with the only clouds well to the west of the start line, it was difficult for us to be at the ideal start height simultaneously.  Each time one pilot fell slightly below, he had to fly back west to gain height again.  Attie and I started with John not being ready.  The first climb at 1.7m/s was found in the first sector.  With no more clouds ahead in this sector, everyone turned towards the second sector.  Only 1m/s climbs were found and the gaggle progressed slowly.

John, in the meantime, started ten minutes later, just clipped the first sector and had good climbs going to the second sector.  Drawing on all his skills, he caught up and then pulled away.  Even as he fed weather information from ahead, he gradually gained more and more over the rest of the 18m Class, who were not able to connect with the good climbs.

Attie and I got split up towards the third sector.  I finally found myself alone in the third sector, with Attie further to the east in a small gaggle.  I connected a 2.3m/s thermal out of the blue in the blue – the best climb of the day – taking me to 1700m and giving a good run into the sector.

On the way back Attie and I met up again, had a good run, but finally struggled in a 0.6m/s thermal to gain the last few hundred metres required to finish the task.

John won the day with his superlative performance – the first day win for a JS1 Revelation in a World Championships – and jumped up to twentieth overall.  Uys was still firmly in third position, while Attie moved up one position to seventh place.

Contest Day 6: A 330 km speed task.  The weather looked good and the JS1 trio discussed start synchronisation to avoid reoccurrence of previous mistakes.  Once airborne, we decided on an early start – to avoid gaggle traffic and the possibility of an early weather cut-off near Szeged, as seen on previous days. 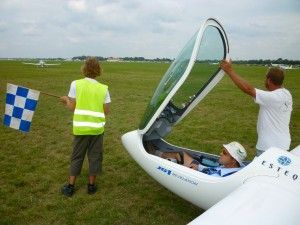 Uys and Antal waiting for the Towplane

The start went smoothly, almost half an hour before the large gaggle.  Our gaggle was a lean, fast gaggle, only consisting of three JS1s.  By this stage we had honed our team flying skills, sharing information and decisions and felt we were ‘in the zone’.

Climbs consistently exceeded 1.5m/s with maximum climbs of 2.3m/s towards the end of the flight.  However there were lots of bugs, and John’s arm became tired of all the winding.  Attie and I had electrical winders installed and wiped after every thermal.  John was  just too tired to wipe before final glide and as a result, finished a minute after us.

The JS1 pilots were chuffed with their performance and finished second, third and fourth for the day.  Only Wolfgang Janowitsch prevented us from taking a 1-2-3 finish; he started much later with improved conditions all over the task.

This performance moved John into fifteenth position overall and Attie to fifth.  Uys was in a solid third position, well clear of the fourth place and within striking distance of the leaders.  Everything to gain, nothing to lose.

The JS1 trio raced to the first turn point, with some climbs exceeding 2m/s.  Towards the second turn, the cloud base started dropping annoyingly, and it seemed that the sun was blocked out by high level cloud over the rest of the task.

Coming closer to the second turn, we slowed down, desperately trying to get to cloud base, before setting off into the bleak weather towards the next turn.  We decided to track back into the approaching gaggle to get a much-needed climb and as a result, got stuck in the middle of the big gaggle.

Progress towards the next turn was extremely slow and we once got as low as 350m before finding lift.  Bok-Base reported that Karol Staryszak (the contest leader) seemed to have landed out as his Yellow Brick track had stopped – and then when his crew left with the trailer we knew that the leader of the 18m Class had landed out early and I could get into second place overall, possibly even first if Karol’s Polish team mate (in second overall) also landed out early.  Back in Bok-Base, Iain was making frantic calculations to predict how far I needed to go to overtake Karol overall, and the tension at Szeged was palpable.

We carefully continued, while the climb rates dropped from 1m/s to less than 0.5m/s and the top of lift dropping from 1000m to 600m.  An outlanding was inevitable after climbing only 0.1m/s at 18h00, just 500m above ground.  I covered 22km with my last precious 500m to land just past the fourth waypoint, Makó not far from Szeged.

Uys finished fourth for the day and moved up to second place overall as Karol Staryszak dropped from first to third place.  Attie remained in fifth overall and John remained in fifteenth position.

Final Day: The final day arrived with severe risks of overdevelopment and storms.  Tasks were set for all classes, but by 11h00, all tasks were cancelled.  I finished the 31st World Gliding Championships in second place, eighty points behind the winner, while Attie finished in fifth position, a mere thirty-nine points behind the third place.

The winner, Zbigniew Nieradka from Poland, later emotionally explained to Uys that he and his team partner, Karol Staryszak, struggled for a long time very, very low on the third leg.  Karol was only a few metres lower and unfortunately did not manage to stay airborne.  At this competitive level small differences such as a few metres can have a dramatic effect, and Zibi managed to climb away to secure gold medal. 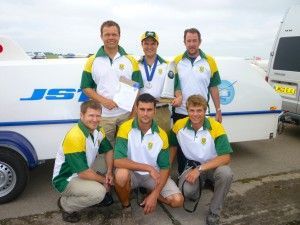 The JS Team was ecstatic with the performance.  (Uys was grinning like the Cheshire Cat for days!)  Of the six JS1 Revelations entered in the contest, we achieved one podium position, and four in the top ten.  Nothing had gone wrong and apart from replacing Russell’s lost bugwiper, all the spares carefully transported from South Africa proved unnecessary.  And the pilots, crews and backup team all had a great time.

Upon reflection, there were a few aspects that really transformed our performance:

Even now, we remain delighted and proud with our performance in Hungary.  We exceeded our expectations and are looking forward to the next Worlds in the USA [2012 Uvalde, Texas]. 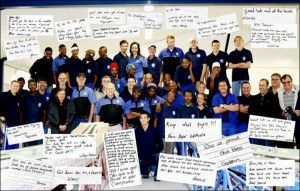