[Editor’s Note: this personal account from Uys and Attie Jonker brings a unique and interesting perspective to the challenges of the 2010 World Gliding Championships (for flapped classes) held from 25th July to 6th August in Szeged, Hungary. It was originally printed in the Jonker Sailplanes December 2010 Newsletter and is republished here with permission].

Attie writes: The WGC in Hungary was my 5th WGC and Uys’ 4th.  In preparation for this championship we did not feel very confident, as our previous experiences had shown us how difficult it is to do well in a Worlds.  Small mistakes that are forgiven in an SA Nationals can cost dearly at this level and all the other pilots are very good or even brilliant.

We had decided that this might be our last competition – it is very hard work to attend and to stay focused.  However Uys remembered asking Michael Sommer some time ago if he enjoyed flying in the Worlds, even in very poor weather: ‘I love it, I just love it,’ was his response.  That got us thinking and we decided that we were going to try and enjoy every minute of this contest.  If we couldn’t enjoy it, then it will be our last comp.

With the many international pilots visiting the JS factory, we had a special opportunity for some practice.  Uys made a point of flying with all the top pilots during their visits.  One of the important lessons I learnt from flying with Ronald Termaat, was to immediately put any errors behind you.  Don’t beat yourself up about it, it’s wasting energy.  Focus to do well with the rest of the day.  It’s easy to recover from an error by flying well during the remainder of the same flight.  If you keep worrying about it, you lose concentration and start to get anxious and lose even more concentration – soon you are clueless.

Once again we realised that the mind game in competitive gliding is far more important than the simple business of using stick and rudder.  So before leaving for Hungary we decided two things were critical:

The preparation for a Worlds starts many months ahead, with organisation of gliders, cars, accommodation, airline tickets, and visas.  There were also six JS1 Revelation gliders to be finished for the Worlds, each with the latest competition modifications and fine tuning of details, even down to the shape and thickness of the Mylar seals.  There was also the logistical challenge of co-ordinating the movement of six gliders, six trailers and a whole load of spares across two continents. 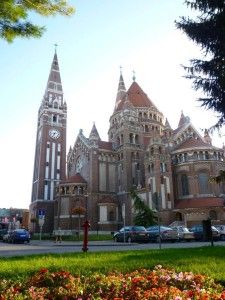 Two weeks before our departure I took a two week camping holiday to reset my brain and Uys tookoff the last week before we left.  We left on 11th July, two weeks before the start of the contest partly because of cheaper tickets, but also to allow ourselves time to get properly organised before the contest start.

We arrived in a very, very hot and humid Hungary.  The temperature was around 38°C [100°F].  We got a black hire car and set off for Szeged, about two hours drive from Budapest.  We arrived around 5pm at Szeged, just in time to follow a JS1 on final glide to the airport.  It was Iain Evans in WZ (JS1B-013).  Iain and Rose were flying their JS1’s in the Flatland Cup in Szeged and afterwards we would be flying them in the Worlds.

When we arrived at the field, we were met by Zolt, the  owner of our accommodation and base for the next four weeks.  After a 20km drive, we arrived in the next town of Mórahalom and stepped into the houses – and were immediately very depressed.  The accommodation was very expensive, and it was very hot inside without any air conditioning.  We were very tired but could barely sleep that night – it was too hot to keep the blankets on, but if you didn’t then the mosquitoes tried to pick you up and fly you outside to their waiting comrades.  The next morning we went to the local hardware store and bought a mobile air conditioner.  That really saved the day or at least the nights – half the night I would take the aircon and the other half Uys got it.

The first couple of days Iain and Rose were still flying the gliders so we spent the time getting to know our way around town and getting everything we needed for the comp.  Hungarian is unlike any language you have ever heard.  It’s impossible to understand a single spoken word or recognise a single written word.  We bought a dictionary but that was utterly useless.  Everything has to be done without saying a word – trying to change money, getting a cell phone, recharging the cell phone and buying special stuff needed for the glider, all without saying a word – quite a challenge.

By the time the rest of the team and our crews arrived, we were pretty well versed in the business of living in Hungary.  In the end we loved it there; the roads are good, the food is very good and affordable, and our accommodation was two minutes walk from a really great thermal spa with hot and cold swimming pools.  This turned out to be very important for our daily after-flight de-stressing.  Sitting for two hours after a flight in a nice spa really is a great way to relax and to get ready for the next day.

As for the flying, Iain and Rose kept us updated on the flying conditions and we discussed their flights with them every evening.  It soon became clear to us that the weather was not going to be easy.  They talked about weak conditions, low cloud bases, large blue patches without lift and very poor visibility.  The more we talked, the more we realised that the weather was going to play a major part in the outcome of this contest.

Finally the Flatland Cup was finished and we got our first flights in Hungary, a week after leaving South Africa.  We decided to fly around and check out the borders with Romania and Serbia (countries which were part of the WGC task area).  The visibility was very poor and we nearly landed out three times during that first flight.  We flew about 150km and landed a bit shaken, very unsure of ourselves and our ability to fly in this weather.

The next day we flew again and ventured to the east this time.  The country is flat with farmland as far as the eye can see – which was not very far in the humid and murky conditions.  The weather was slightly better, but on returning nearer to the field it suddenly switched off and thermals were nowhere to be found.  I battled to get onto final glide.  Below us was a lovely unfinished highway with no other roads to the airfield.  I scraped back to the airfield and was sure Uys was going to land out.  He found a thermal at 200m and got in about ten minutes after me.

Landing out was something we really wanted to avoid as our trailer was a special one that can carry 2 JS1’s simultaneously.  So if we did land out we would have to land close to each other to prevent difficult retrieves.  Also our tow vehicle was not really suited to driving through rough fields, so we were a bit anxious about the outlanding possibilities.  Furthermore we’d heard rather scary stories about retrieving from Romania or Serbia. 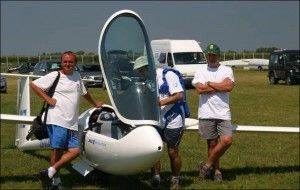 We had already flown three times before the practice period, and then flew all three practice tasks.  Slowly we got used to the conditions and got our minds around the weather.  We noticed some of the good guys only flew one or two practice days.  By the start of the competition we had six flights in the bag and were feeling much better.

To reduce distractions we brought a really experienced crew along.  AP Kotse was responsible for our gliders and we also hired a local guy called Antal who spoke very little English, but was hard working and a great help.  Having someone who could communicate with the locals proved to be very convenient.  Ronald Taljaard came along as technical representative for JS.  We did not want the other JS1 pilots to bother Uys and me with technical issues that would distract us.  Ronald did a sterling job of sorting all technical problems and keeping the other guys from distracting us. 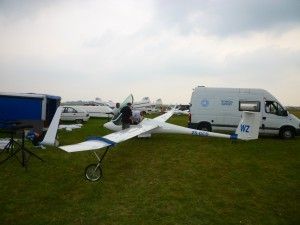 We soon got into a daily rhythm.  We would get to the field at 8:30.  Antal and AP would prepare the gliders and get them to the grid.  Uys and I would help, but only checking critical items.  Off to the briefing and then to the gliders and fly.  After landing the crews would take the glider to the tie down area and we would get the log files uploaded.  Once this was done Uys and I would check on the gliders and then set off to Mórahalom to relax in the spa and then get something to eat and off to bed.  The crews would arrive at their leisure and eat with us before setting off to the local night life.

When the contest started we were mentally on top of things.  All technical issues were sorted out.  The gliders performed really well.  This was the first Worlds where we had the distinct impression our gliders were better than the other gliders in our class and that gave a real mental boost.  We enjoyed everything and every day I made a mental note as I got into the glider, ‘This is a really great and fun thing to do’ which got me into a positive frame of mind.

It started raining during the opening ceremony and continued for four days.  In hindsight this was a blessing for us, as we had probably flown too much during the unofficial and official practice days.  It was bad news for all the other pilots who hadn’t flown enough and were eager to get on with the contest.  Many of them got frustrated with the poor weather and immature organisation, wasting mental energy.  Conversely we felt relaxed, calm and confident, better prepared for the competition than ever before.